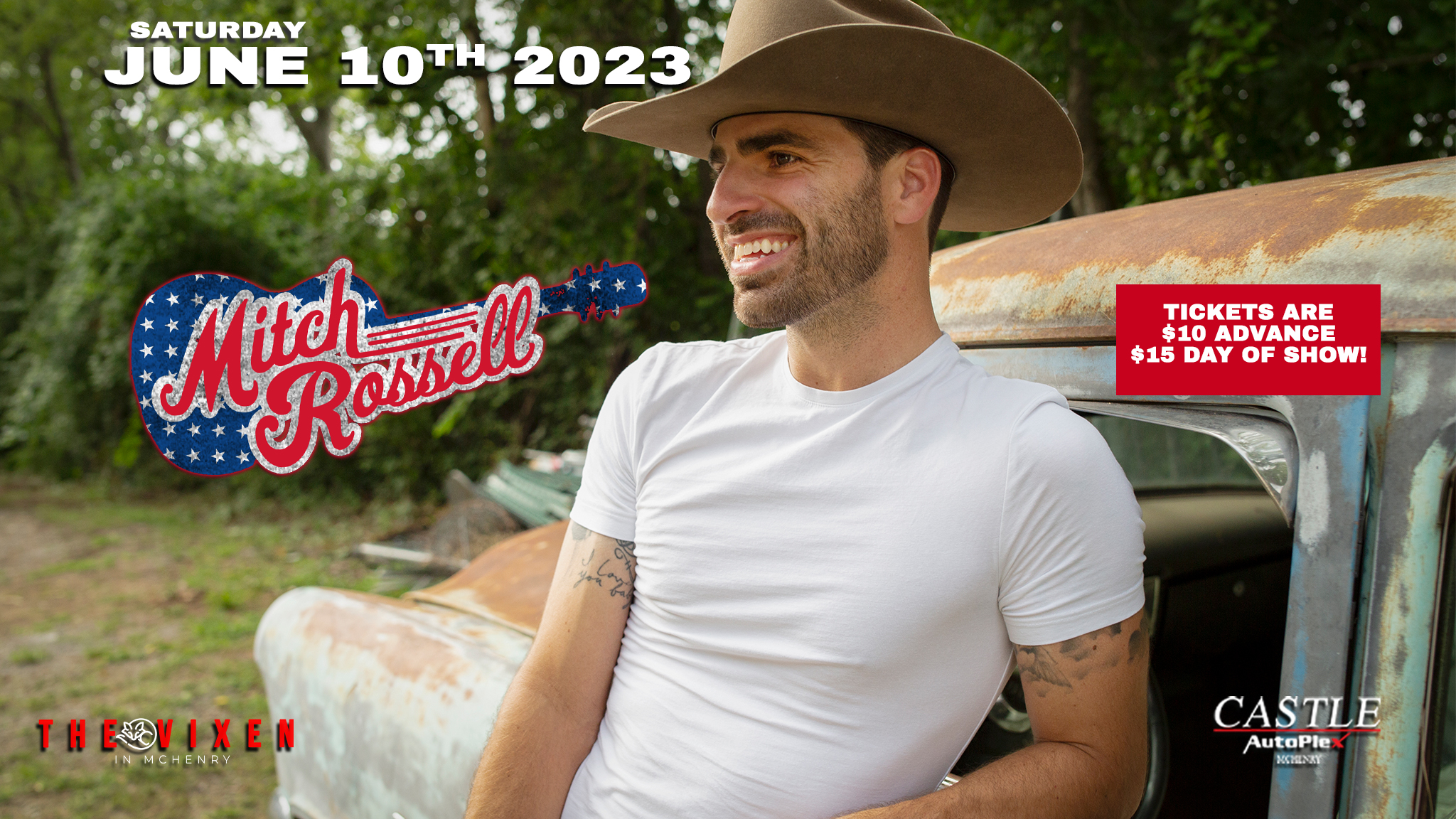 Mitch Rossell’s career is exploding, with his prolific songwriting and unique artistry currently on showcase in front of tens of thousands of fans each weekend. With just an acoustic guitar, Rossell takes the stage show after show, winning over thousands of new fans and often receiving standing ovations for his original material.

Russell’s tenacious work ethic and no-shortcut approach caught the attention of his all-time favorite artist and country music legend, Garth Brooks, who asked him to join both his summer 2016 world tour and his current 2022 stadium tour. Along with opening, Rossell has written Brook’s last 4 singles, one of which is “Ask Me How I Know” (which he wrote by himself) landing his first #1 single. He also co-wrote Brooks’s singles: “That’s What Cowboys Do”, “All I Day Long”, “Dive Bar”.

Rossell has been successfully releasing music of his own including the fan favorites “All l Need To See,” “2020” and “Ran Into You” ft. Trisha Yearwood which, together, have garnered nearly 21 million streams on Spotify alone.
Years before Mitch Rossell’s all-American country music earned him an audience across the globe — both as a blue-collar solo artist and as the songwriter behind hits like Garth Brooks’ number one smash “Ask Me How I Know” — he grew up in East Tennessee, raised by a hardscrabble family that taught him the values of hard work and determination. Rossell would later funnel those qualities into his own songs, creating a sound that bridges the gap between country music’s rootsy past and modern present… with hooks, heart, and plenty of rock & roll influences thrown into the mix, too. He’s been creating his own version of the American dream ever since.
‍
Rossell proudly calls himself “a middle-of-the-road, regular guy who writes songs about real life.” Simply put, his songs are relatable because he is relatable, and he’s never been afraid to get his hands dirty while chasing down success.
‍
“I had a job by 15,” says the prolific musician. “I’ve always been taught to work hard, dig in, and go after what I want. That’s how I’ve approached writing, too. I really enjoy the process of digging in on a song and taking my time to really try and make it great. That’s my personality. Anything worth having ain’t easy, and if it is easy, it probably ain’t worth having.”
‍
It was Rossell’s late father who introduced him to the guitar. Rossell began playing the instrument daily during the summer before college, quickly turning his hobby into a life-changing passion. Two weeks after his college graduation, he moved to Nashville. There, he followed the advice he’d received as a child, rolling up his sleeves and immediately getting to work. More than five years of gigs on Lower Broadway followed, with Rossell playing for tips while steadily sharpening his chops as a performer. His setlists were just as broad as his influences, and they helped shape the original material that he’d eventually perform to much bigger crowds. “I’d do some Nineties country, some older stuff, and some new stuff,” he remembers of those days playing bar gigs. “A little rock & roll and folk music, too, from the Eagles to James Taylor.”
‍
Rossell’s honky-tonk performances became a hit not only with the country music fans who packed Lower Broadway night after night, but also with some of the genre’s heaviest hitters. Megastar Garth Brooks became one of Rossell’s biggest champions in 2014, drawn to the young songwriter by his work ethic, no-shortcut approach, and show-stopping music. Two years later, Brooks invited Rossell to join him on his record-breaking world tour. Armed with nothing more than his voice and acoustic guitar, Rossell opened each show as a solo act, winning over thousands of new fans and regularly receiving standing ovations. The experience helped shine a light on his ability to connect, even without the help of a band. After all, Rossell didn’t need backup musicians in order to make an impact — all he needed were his songs, which were rooted in lyrics about familiar topics and shared experiences. Along the way, he wrote Garth Brooks’ last three singles, including the number one song “Ask Me How I Know”, “All Day Long” and Brooks’ Top 20 duet with Blake Shelton, “Dive Bar.” He also helped pen Brooks’, “That’s What Cowboys Do”, with Brooks and John Martin.
‍
Even so, Mitch Rossell continues writing material for his own artist journey. “All I Need To See,” a potent blend of country storytelling and propulsive hooks, and “Ask Me How I Know,” his own version of the original song that became Brooks’ first number one hit since 2007, has racked up millions of streams on Spotify. More songs are on the way, too. At the end of 2020, after a trying year for so many, Rossell released his explosive and uniting song called “2020”. Premiering it on TikTok, fans instantly reacted and launched the song, in a matter of days, to the #1 spot on the iTunes Country Chart and to the #5 spot on the iTunes All Genre Chart. His “2020” music video has been viewed over 15 million times. Rossell continues to turn his personal experiences into universal stories, spinning relatable stories about childhood, love, family life, bars, and the shared emotions that bind us all together. A proud family man, he continues to uphold the advice that his own family gave him years ago — and he’s been able to pass it along to his own children, too, leading by example along the way.
‍
“I’m talking about what I know, how I feel, and what I think,” says Rossell. “When I create music, I draw from my own life, as well as what I see around me. I try to be a vulnerable writer and storyteller, because that’s where the truth is.”

Give it a listen!